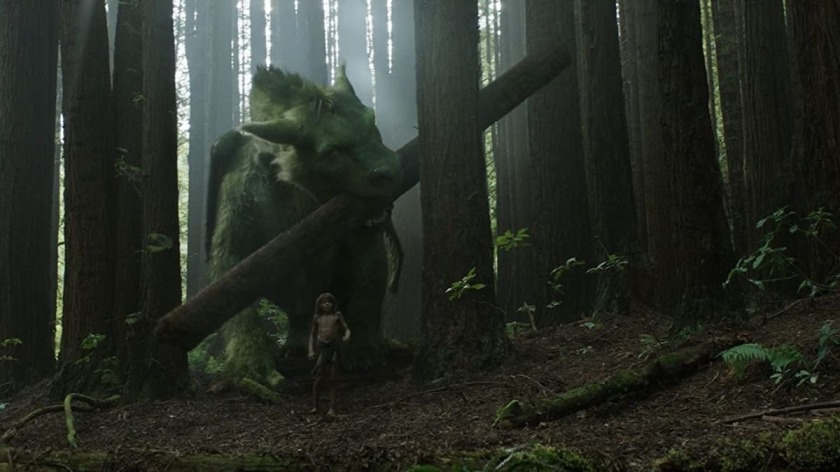 If ever a movie could be described as a warm hug, it’s David Lowery’s mind-bogglingly earnest Pete’s Dragon.

One in a long line of Disney’s “live-action” remakes, by the time this one came out in 2016 most people had accepted these were middling cash grabs with little in terms of style or value. Only the overwhelmingly positive reviews got me to the theater, and to say I was gobsmacked would be an understatement.

From its detailed, melancholic opening, you know Pete’s Dragon is up to something wholly unlike modern family fare. Where most go quick and loud Pete’s Dragon goes slow and quiet. It’s shocking, actually, how little happens in this movie, but it delivers a more full, satisfying message than many adult-oriented films even aspire to.

This Pete (a surprisingly subtle Oakes Fegley), you see, is an orphan who lives in the forest with a very dog-like dragon. The circumstances that brought this about are covered in that stunning opening, which moves from sweet to devastating to terrifying to hopeful in a tour de force of filmmaking. After several years in the woods, Pete encounters a girl, and by proxy the girl’s family, who take him in as officials struggle to figure out where he came from. Here Pete experiences a loving family, a strange, comforting dynamic so outside his norm that he’s unsure what to do with it.

The focal point of this alluring new way of life for Pete is the mother, Grace (a never-better Bryce Dallas Howard). Now, she’s not technically the mother, (the film cleverly shows that she’s the girlfriend of Wes Bentley’s Jack without making a big deal of it), but in narrative terms, she’s every bit the gentle, caring figure her name implies.

Yet she’s not a pushover. She’s a park ranger constantly tussling with local loggers, which provides a subplot about environmentalism that fills out the movie and her character nicely. The balance it allows Howard and Lowery to strike with Grace, making her soothingly sweet, undeniably capable, and a little headstrong all at the same time, is one of those complex but kindly things that makes this movie pop out of the screen.

The breadth of that character is pulled off so flawlessly that it’s easy to overlook, as is, I fear, the entirety of what Pete’s Dragon achieves. Without calling attention to itself, it evokes both an old-fashioned world and our present day, implying that whatever we think we’ve lost has been there all long.

That family that Pete finds so comforting? They feel so close and secure that they could be straight out of the 1950s, and yet they’re very much a cobbled together family like so many of us exist in today. It doesn’t matter that Grace isn’t technically the girl’s mother. The trust that exists between the two (the one that draws Pete and the audience in) is such that they cling together, and those little moments when they reach for each other, literally move together, are such visceral nods to their solidarity that they make my heart flutter (also, the little “dad” Howard ekes out when she first sees the dragon makes me melt).

Oh yeah, Grace’s dad is played by Robert Redford, and who isn’t happy watching Robert Redford? His character is the old guy no one takes seriously, probably because he keeps talking about a dragon he saw decades back. Redford plays him with such a steady sense of self that you’re basically chuckling with him as the rest of these whippersnappers discover what he’s long known: that there is a little magic left in this world.That’s what it feels like to watch Pete’s Dragon, like you’re being reminded of what the world could be. It could be one filled with decency and joy, and yes, maybe even a friendly dragon. What a magical world that would be.