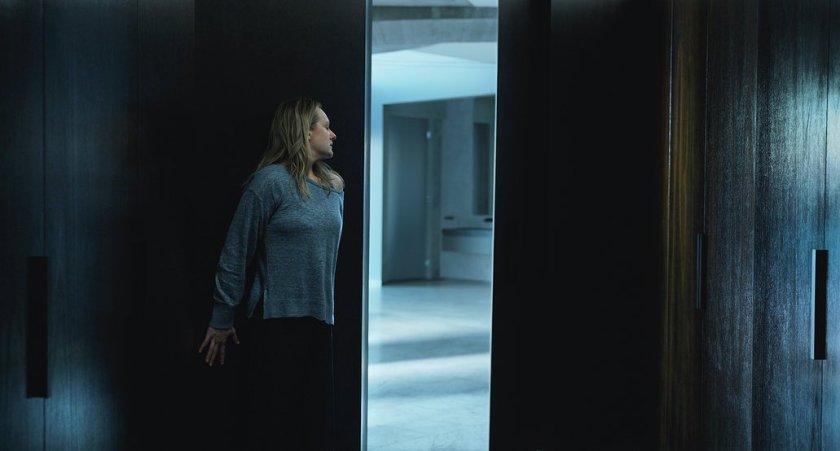 The latest iteration of The Invisible Man comes in with a hard twist, taking a seminal creation from the father of science fiction and making him into a modern embodiment of abusive, powerful men. And sure, that’s the kind of topical spin that can make a reboot worthwhile, and letting the current taker-on of female trauma, Elisabeth Moss, portray his tormented ex Claire only heightened expectations that this film may have something to say along with its scares.

But alas, the film falls into stale traps, ones so basic and obvious that it’s almost maddening to see them regurgitated for yet another rote thriller. Women in peril? Check. Completely gratuitous violence? Check. Female characters with almost every feminine quality drained from them? Big check.

It’s the latter that’s incredibly troubling here, as this Invisible Man thinks it’s about abusive relationships and their lingering trauma. And yes, abuse is in no way confined to heterosexual relationships, nor are men always the perpetrators, but statistics show that the vast majority of the time it plays out as you see in this movie: the man is the abuser and the woman is the victim.

The film plays into such emblematic behavior that it’s hard not to see it working to evoke the milieu of our time, one where the dismissal, subjugation, and abuse of women is openly and loudly discussed. I mean, just look at the pieces surrounding it. In theaters with The Invisible Man is The Assistant, a day-in-the-life of a low-level female assistant that plays like a silent scream. You can currently catch Moss on your TV in the dystopian adaptation The Handmaid’s Tale or go back a few years to see her in Top of the Lake. She’s no happier in either of those series as she is in Invisible Man, because damn it, she is the taker-on of female trauma, and both series evoke the stresses and fears of women in ways that will knock the wind out of you.

Even the happy spins on ladies still have our limitations in mind, as you can also see in theaters with Little Women, Portrait of a Lady on Fire, and Birds of Prey. You might think it dispiriting to see so many pieces taking on the downsides of my gender, but to the contrary, an exhilarating movement is afoot to rewrite the narratives we get.

Brit Marling, co-writer and actress in projects like The OA and Another Earth, recently articulated what so many of us are fighting against in her New York Times opinion piece I Don’t Want to Be the Strong Female Lead:

“It’s difficult for us to imagine femininity itself — empathy, vulnerability, listening — as strong. When I look at the world our stories have helped us envision and then erect, these are the very qualities that have been vanquished in favor of an overwrought masculinity.”

And it’s in this exact way that The Invisible Man erases not the man but the woman. Or, at least, her femininity. At every turn it resorts to violence to resolve conflict. Characters both male and female are held up for being able to stand their ground, for being able to beat one another in a fight (which is weirdly explicitly stated in a conversation between two women). What’s absent is any true reckoning with Claire’s emotional trauma, because despite its aspirations, all this movie really achieves is a few fleeting moments of suspense.

And yes, writer/director Leigh Whannell is efficient at moving between scares and knows how to place a camera to suggest a lingering threat. There’s a core competence to this movie that cannot be denied, but I want more than competence, and I demand much more than slick thrills if you are aligning yourself with such a critical movement.

If anyone understood this film’s potential it’s Moss, who does her best to give Claire some semblance of emotional life outside of white-knuckled terror. She’s proven again and again that all you need to do is train a camera on her face to take the audience on a journey (see any of Handmaid’s Tale but especially a revealing dinner scene in the first season of Top of the Lake), but Whannell is more interested in showing brutality than emotion.

Take, for instance, a centerpiece sequence in Invisible Man. A hallway becomes a tour de force bloodbath as combatant after combatant falls to the titular antagonist. Moss, meanwhile, cowers and is almost completely forgotten, the sequence completely losing focus of the movie’s main arc (you know, the one about a woman extricating herself from her abuser). Imagine how horrifying it would be to see her reaction to this violence, to see her attempt to process being caught in his web again, but this is given no time. Instead she’s off the races before the blood is dried, sprinting to the next set piece as the movie continuously does with only a few moments to spare for rudimentary emotional beats.

There’s little for Moss to do with these wisps of breath, and even then you’re often too distracted by some ludicrous plot contrivance to take in what she’s doing (the script relies a lot on coincidence and stupidity, making an invisible man one of the more believable elements of the story).

To be blunt, this was a story made by a man who seemingly has no interest in upsetting the status quo. He imagines violence as a resolution to emotional trauma, a not-so-subtle replacement of the woman at the story’s center with, as Marling described it, “a man but in the body of a woman I still want to see naked.” And in a time where different kinds of stories are taking up space, where Little Women and Portrait of a Lady on Fire are showing the great art that comes from a female gaze and The OA is imagining faith in your fellow man overcoming violence, The Invisible Man’s faux femininity feels like a massive step backwards.